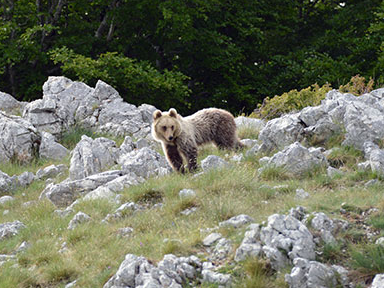 Rewilding Apennines and Salviamo L’Orso are working with the local reserves and national parks to protect these wild species and monitor the local fauna and flora.

These camera traps have been set in a site of European Community Importance “Sagittario Gorge” (SCI IT7110099) featuring amazing gorges surrounded by steep peaks, above which isolated ancient forests and summit grasslands surround ancient villages built on the rocky ridge. The SCI is managed by the local WWF Nature Reserve and the San Domenico and San Pio Lake Nature Reserve. The camera trap data will be analysed to produce an atlas of the local fauna as well as investigate the environmental factors that determine occurrence and density of medium and large carnivore species in order to inform management practices aimed at favouring the recolonization of the Apennines by rare and threatened populations such as the Marsican brown bear.